skip to main | skip to sidebar

I have a gorgeous vintage Hollywood Regency style sofa for sale!

Tufted black vinyl body with wood and woven rattan arms. Does have two small tears and a couple of marks, I draped a cowhide in a very dramatic fashion over the sofa so it did not matter to me.

If you have any questions or would like to see the sofa. I was going to have it reupholstered but i needed to buy a pullout sofa for weary Aussie travelers instead! 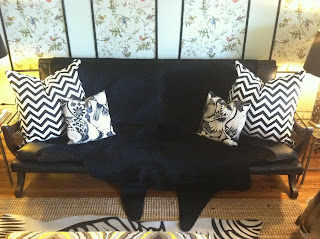 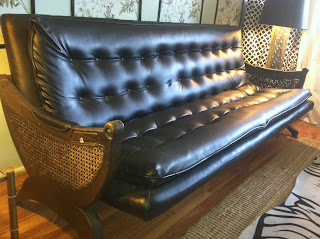 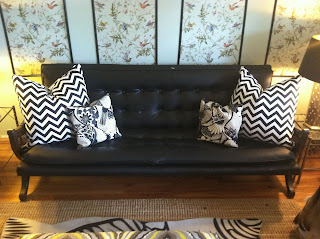 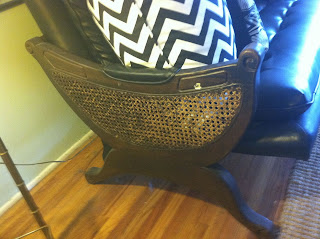 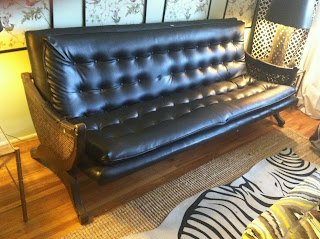 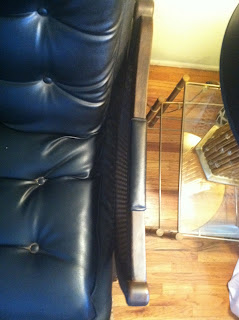 Look at the new Angeleno Interiors Magazine and see a photo from an Angeleno/Miele party hosted by Snyder Diamond. Photographed with my talented designer friends at that party! Vanessa De Vargas, Ron Woodson and Michelle Workman What a fun evening with spectacular food. 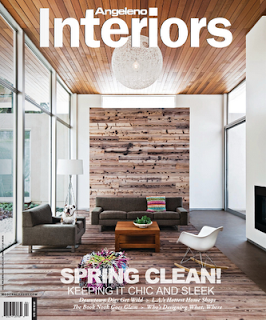 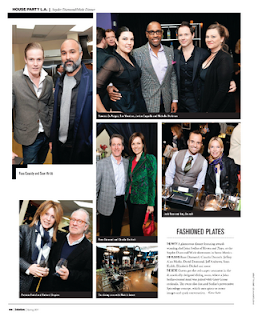 Click here to view the latest issue we are on page 98.
Posted by Jordan Cappella at 10:09 AM 2 comments: Links to this post 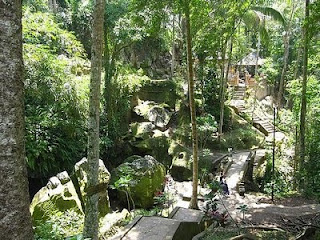 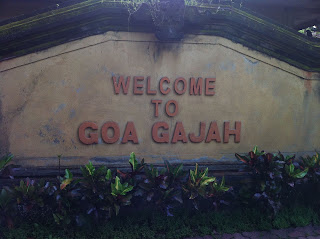 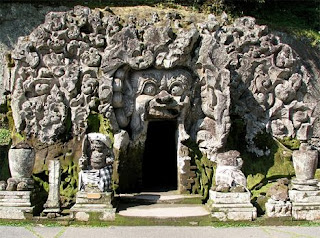 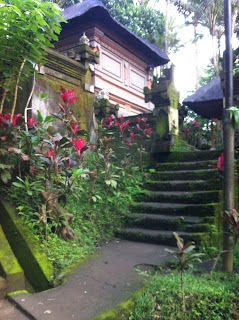 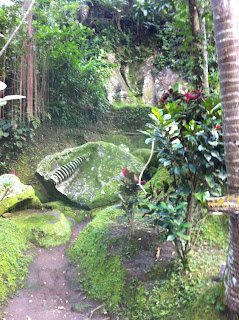 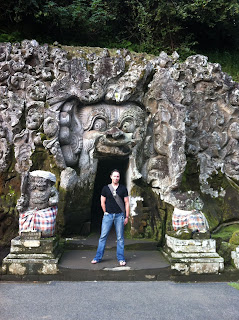 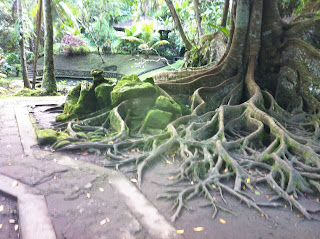 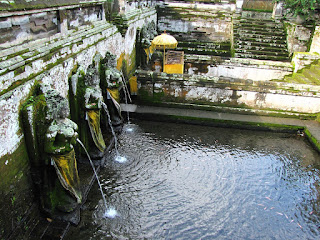 Situated in Bedulu Village, Gianyar, Goa Gajah is believed to have been carved from a hillside as a monastery in the 11th century, though it wasn't rediscovered until 1923. The name of this cave is probably taken from the nearby Petanu River, which at one time was known as Elephant River, or possibly because the entrance to the cave resembles an elephant. It is used by the Balinese as a holy place for worshipping the God Shiva and his elephant-headed son Ganesha.

Buddha statues and fertility symbols can be found inside the cave, suggesting that it had a long history of religious use. Today, it is a cool, dark place to contemplate Bali's distant past.


The origins of the cave are uncertain. One tale relates that it was created by the fingernail of the legendary giant of Kebo Iwo. It probably dates at least to the 11th century, and it was certainly in existence at the time of the Majapahit takeover of Bali. The cave was rediscovered by Dutch archeologists in 1923, but the fountains and bathing pools were not unearthed until 1954.

Inside the T-shaped cave you can see fragmentary remains of Lingam, the phallic symbol of the Hindu God Shiva, and its female counterpart the Yoni, plus a statue of Shiva's son, the elephant headed God Ganesha. In the counter yard in front of the cave are two square bathing pools with water gushing into them from waterspouts held by six female figures. To the left of the cave entrance, in a small pavilion, is a statue of Hariti, surrounded by children.
Posted by Jordan Cappella at 5:41 AM 1 comment: Links to this post

Potato Head - Where all the Pretty People go in Bali! 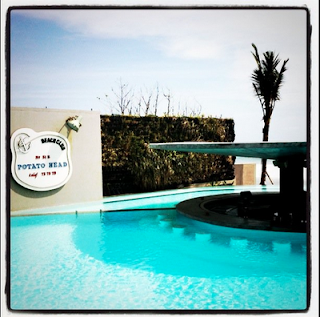 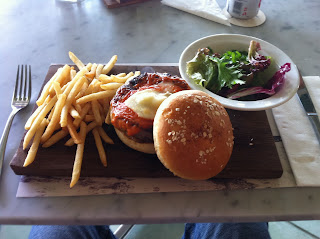 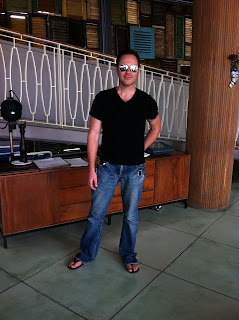 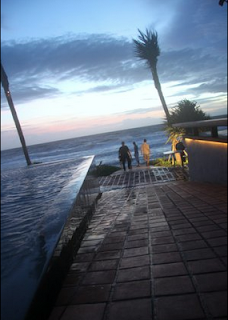 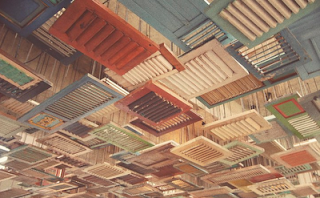 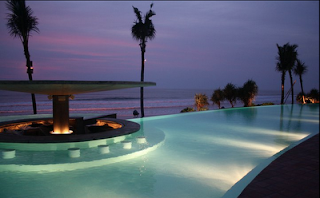 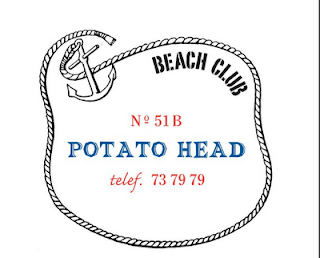 Potato Head is a sophisticated twist on the typical bistro and bar around the globe set in a unique original design complemented by a different  interpretation of authentic bistro cuisines and a cocktail list that have set a totally new standard of drinking culture in Bali. Potato Head Club located on the beach in Seminyak, ushers in a new era with an internationally recognized venue.

That being said.......... if you want to be with the pretty people this is the place to go (I snuck in).....Think a Schrager property. And don't forget you swimming costume, you wont be able to resist a dip in the stunning infinity pool!


My favorite part of course a design feature..........the entire exterior wall is made from vintage shutters!
Posted by Jordan Cappella at 9:59 PM No comments: Links to this post

The Santa Monica Red Cross will hold its biggest fundraiser of the year, the Red Tie Affair gala, on April 9, 2011, at the Fairmont Miramar Hotel in Santa Monica. 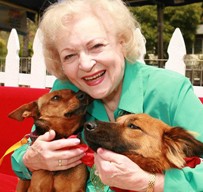 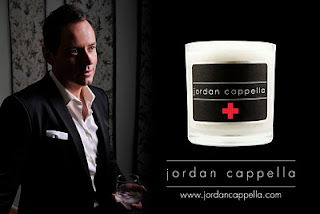 The one and only actress and comedienne Betty White will be the 2011 recipient of the National American Red Cross “Crystal Cross Award” for her outstanding contributions to animal welfare efforts. She is well-known for her warm heart, and loving and generous dedication to animals. Through her career Betty has been an inspiration to many people, including all of us at the Red Cross, and we are genuinely thrilled to honor her with this prestigious Red Cross award.

So proud to be a part of this.
Posted by Jordan Cappella at 7:30 AM 1 comment: Links to this post

THINGS TO DO BLOG